Exploring interventions to improve the health and wellbeing of older people

What Keeps You Sharp?

Researchers are therefore trying to better understand how our thinking skills change (or stay stable) as we age. In exploring the variation that exists from person to person, a really important question then arises: What factors affect the changes we might experience?

Dr Alan Gow from the School of Social Sciences, has won the British Psychological Society’s Public Engagement and Media Award 2016. This award is made each year by the BPS Education and Public Engagement Board to a psychologist engaged in communicating high-quality research, or the legacy or impact of the discipline, to the general public.

I'm a scientist, get me out of here

In November, Dr Ria Vaportzis took part in "I’m a Scientist, Get me out of here!", an online event that connects scientists with school children aged 14-18 years old. For two weeks, the students get the opportunity to interact with scientists online and ask them anything they want. Ria said “It was a fun and easy way of engaging in public outreach from the comfort of my desk!”. You can find out more about I’m a Scientist and see Ria's profile here. 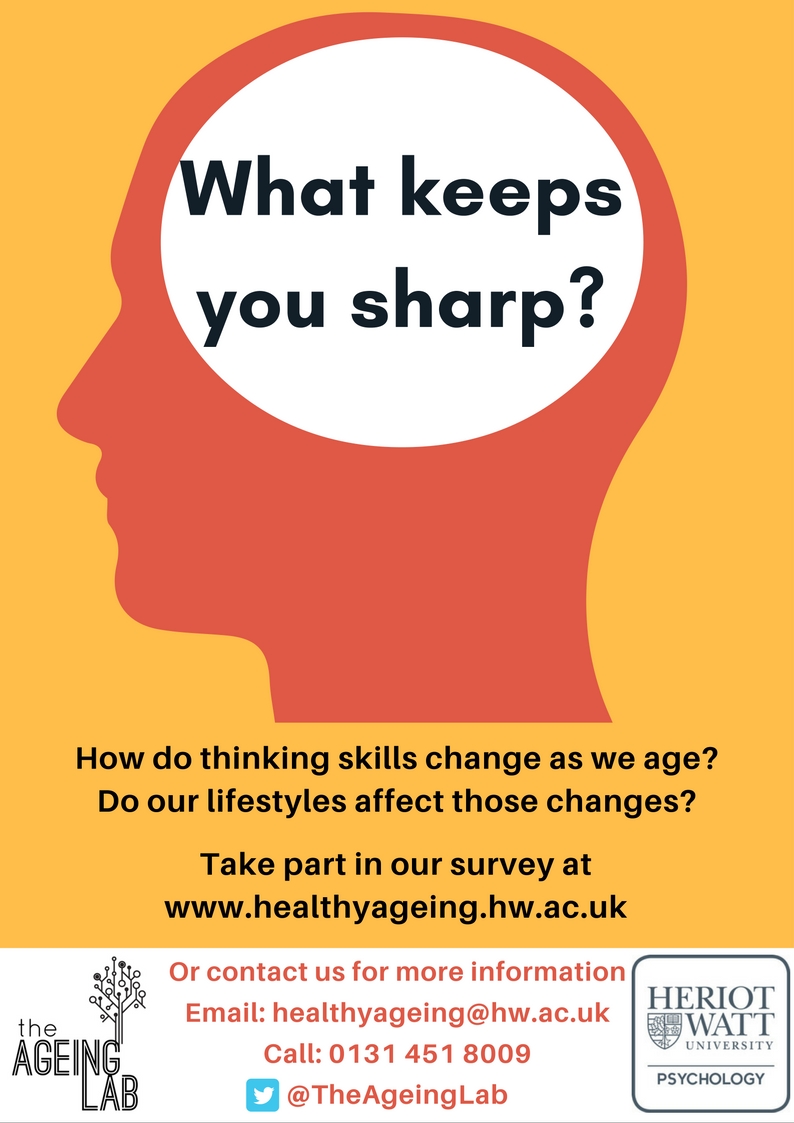 Heriot-Watt researchers have launched a nationwide survey to explore people’s beliefs about how our thinking skills change as we age.

People often think of changes in their thinking skills in terms of decline. While some people do experience these changes, others do not. The new survey will get a clearer picture of how much people know about the possible changes and the factors they think might be good for brain health.

The What Keeps You Sharp? survey launched today and is being led by researchers in The Ageing Lab from Heriot-Watt University’s Psychology Department, Edinburgh.

In October, Dr Alan Gow was invited to speak at Age UK’s “It’s Never Too Late” Conference. The meeting focussed on the benefits of physical activity for older adults and was held at the Oval, a very apt venue given the topic. Alan spoke specifically about physical activity and brain health using examples from the LBC1936 study.

In the same week, Alan was invited to participate in the Global Council for Brain Health (GCBH) Issue Specialist Meeting: Social Engagement and Brain Health at Age UK's London headquarters. GCBH is an independent organisation, created by the AARP in collaboration with Age UK, to provide trusted information on how all of us can maintain and improve our brain health. The meeting was hosted by Age UK’s Tom Wright and moderated by Sir Martyn Lewis, best known as anchor of the BBC news.

Chief Scientist James Goodwin and his Age UK colleagues organised a very successful meeting and a consensus report was drafted by AARP staff during the meeting and will be released early next year by AARP and Age UK.

Applications are invited for a Research Assistant position commencing from January 2017. The Velux Stiftung funded "Intervention Factory" project seeks to explore real-world activities as potential interventions for cognitive ageing. The post will be for 30 months. As part of the research team, you will assist in initiating this new research programme. You will collect psychological and health data, support the coordination and monitoring of the intervention programmes, prepare data and assist with analyses, and contribute to publications and reports. Full details on the post, including how to apply, can be found at: https://www.hw.ac.uk/about/careers/jobs/job_SVJDNjIyOQ.htm.

The Great British Brain Off at the British Science Festival

A show by a Heriot-Watt academic was selected for inclusion at the British Science Festival 2016 in Swansea.

The Intervention Factory project officially commenced in July 2016, with Dr Ria Vaportzis joining the team as Postdoctoral Research Associate. The three-year project funded by Velux Stiftung will test a range of activities within existing community-based programmes as potential interventions to reduce cognitive ageing in old age.

The first phase of the project will launch towards the end of the year and a survey to explore how people understand the changes that occur in thinking skills with age, and the lifestyle factors that might influence those changes.

The National: How to grow old healthily: new study breaks free of the lab to measure impact of real-world activities.

Later this year, a new intervention study will commence at the Ageing Lab funded by the Velux Stiftung. The Intervention Factory is a three year research study which will test a range of activities within existing community-based programmes as potential interventions to reduce cognitive ageing in old age. The project will be directed by Dr Alan Gow and will benefit from input from a local Intervention Factory Forum (comprising colleagues from Age Scotland, NHS Lothian and Edinburgh Council) and an international Advisory Panel (Professor Kaarin Anstey, Australian National University; Professor Ian Deary, University of Edinburgh; Professor Mike Martin, University of Zurich; Professor Kaisu Pitkälä, University of Helsinki; and Age UK).

The project is due to commence next month and a full funding announcement will follow. 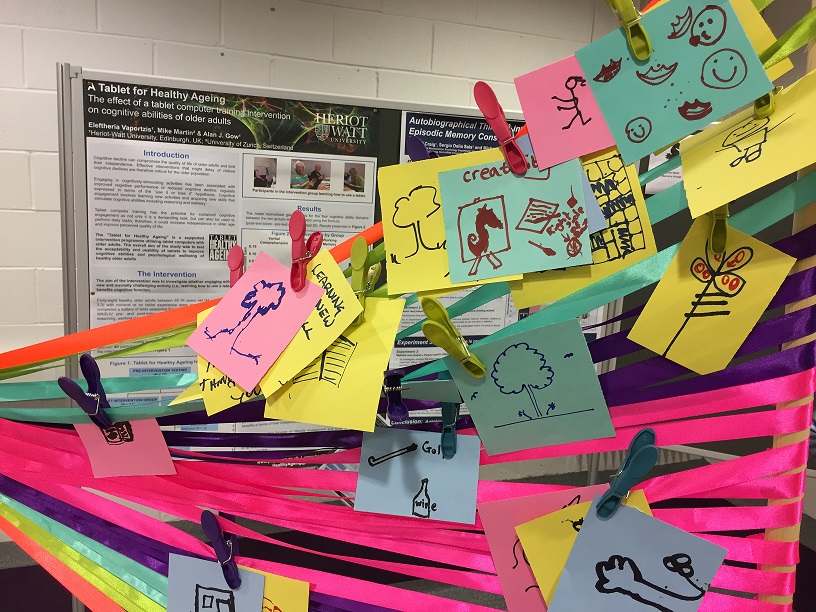 The Tablet for Healthy Ageing results were included in the Innovation Zone as part of Heriot-Watt University’s 50th Anniversary Garden Party. The event celebrated the 50th anniversary of the award of the university's Royal Charter and the award of the Queens’s Anniversary prize for research. The Innovation Zone, organised by Heriot-Watt Engage, offered hands on experience of the research being conducted across the schools and departments at Heriot-Watt. Dr Alan Gow joined colleagues from the Department of Psychology to showcase research focussed on “Memory, Ageing and the Brain”.

The Great British Brain Off returns

In May, Dr Alan Gow performed his “Great British Brain Off” show as part of the Talk Science @ Irvine Bay programme, hosted by the Royal Society of Edinburgh. The show was originally created for the 2015 Edinburgh Fringe as part of Edinburgh Beltane’s Cabaret of Dangerous Ideas, and explores the factors that might protect or harm the ageing brain. The audience are encouraged to share their ideas about the key lifestyle ingredients which forms the basis for discussions about how we might best protect our thinking skills as we age. You can access a report from the event, or watch the full show below.

Presentations at the Cognitive Aging Conference 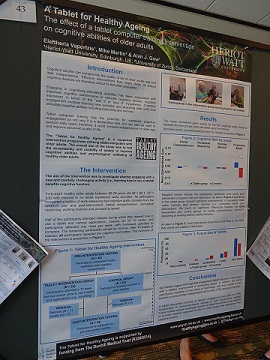 Project Director, Dr Alan Gow, presented at the Cognitive Aging Conference in Atlanta, Georgia, in April. Dr Gow presented new longitudinal findings from his research on the Lothian Birth Cohort 1921 study at the Centre for Cognitive Ageing and Cognitive Epidemiology, in addition to sharing the intervention results from the Tablet for Healthy Ageing study, the full abstract for which is below.

Cognitive ageing is among the greatest fears that individuals have about growing older. Technological development has the potential to provide timely interventions to assist older adults in keeping healthy and independent for longer. To test the acceptability and usability of tablet computers to improve health and wellbeing, 48 healthy older adults aged 65 to 76 (M = 69.3, SD = 3.4) with no or minimal tablet experience were recruited into a randomised controlled trial. At baseline, participants completed a battery of cognitive tests (selected from the Wechsler Adult Intelligence Scale) as well as health, psychological and wellbeing measures. Participants were randomised to an intervention group (tablet training) or control group. The tablet training group attended a weekly 2-hour class for 10 weeks during which they learned how to use a tablet and various applications, and were required to complete activities between classes. Post-intervention testing is scheduled for completion mid-December 2015. To date, 20 control and 22 intervention participants have been reassessed. While both groups had faster processing speed performance on the second occasion, the improvement was significantly greater in the tablet intervention group versus controls. There were no group differences in verbal comprehension, perceptual reasoning or working memory. Final results will be presented on completion of retesting. Training in the use of new technology, an example of a new and mentally engaging activity, improved some cognitive functions, and also provided older adults with new skills that are useful in assisting day to day tasks (e.g., navigation).

In March, the Tablet for Healthy Ageing team continued disseminating the findings from the intervention stage of the study. Dr Ria Vaportzis gave a presentation at the British Council Researcher Links workshop ‘Ageing and Health – How to get there?’ in Sao Paulo, Brazil (14-16 March). Ria also presented the study’s findings at Neuroscience Day 2016, organised by Edinburgh Neuroscience (University of Edinburgh).

A paper discussing the tablet intervention results is currently in preparation, and full details will be added to the Publications page as this progresses.

The final stage of the Tablet for Healthy Ageing study has been completed. Fourteen participants who received tablet training last year took part in post-intervention focus groups at Heriot-Watt University. Participants discussed how tablets were helpful in assisting them with their everyday lives, the advantages and disadvantages of using a tablet, and provided a general account of their tablet training experience. The focus group data are being analysed and results will follow later in the year.

The Tablet for Healthy Ageing team is currently disseminating the findings of the study. Dr Ria Vaportzis and Dr Alan Gow presented the outcomes at the School of Life Sciences Seminar series at Heriot-Watt, and also the University of Glasgow. Ria will also present the results at the British Council Researcher Links workshop ‘Ageing and Health – How to get there?’ in Sao Paulo, Brazil (14-16 March), and  at the Cognitive Aging Conference in Atlanta, USA (14-17 April).

You can read our recent updates in the News section.